Mathematically creating the 'perfect' permutation for reservations in a hostel

I am working at a hostel which uses a reservation system for each room and the beds in the room (e.g. $14$ beds in one room, bed numbers $1-14$.) When we get bookings for multiple people, we assign beds as available, which can cause problems in the future. An example of our system is seen here (click to enlarge images): 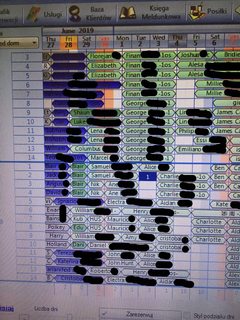 As you can see, the groups 'Finan' and 'George' ($1$st of July) are nicely coordinated such that they are sequential. However, looking at the same image, the group 'Alice' is split between beds, and so is 'Aidan'.

With a bit of 'tetris', it's possible to move around all the reservations such that they are all together, however this takes time and most definitely can be automated. This can be seen much more easily in this photo: 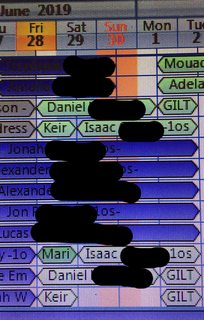 What would be an optimal way to automate the process of repositioning these reservations such that they are all combined sequentially?

Another issue, which may, therefore, contradict the previous issue, is when reservations must be reorganized due to a required change of bed for a multi-day stay. For example, if a guest were to book for 2 nights in this situation

would be forced to change beds after their first night; perhaps (distinctive of the first issue) it is possible to algorithmically find a 'solution' such that the guest wouldn't have to change beds, and all groups are kept together.

Any support for this would be much appreciated.

This is eerily similar to hospital bed planning which has a number of papers under the term Patient Admission Scheduling. It is originally defined and implemented by the CoDES group here. I have an implementation in optaplanner-examples too.

Here are a couple of simple MIP models that (I think) accomplish the first task, of assigning everyone to a bed while minimizing splits. They are both single-day models, which means they don't address the second task, of minimizing the number of people who have to switch beds during multi-day stays.

Note that the objective function penalty is the same if 1 group skips 2 beds as it is if 2 groups each skip 1 bed. Therefore, it's not really minimizing the number of splits, but the number of skips.

This model uses the same parameters, and the following additional decision variable:

The first two constraints are the same as in the first model. The third constraint assigns the dummy group. The fourth constraint says that if $x_{ng}=1$, then $z_{ng}$ must be at least equal to the number of stranger-neighbors—the number of people of other groups that are assigned to beds $n-1$ and/or $n+1$—(but really it will equal this number, since we want to minimize $z_{ng}$); and if $x_{ng}=0$, then $z_{ng}$ can equal 0.

Personally I like the second model a little more—I like counting "splits" rather than "skips". But it has more decision variables. On the other hand, I think you'll be solving small instances ($N=14$, $G\le 14$?) so either formulation should solve plenty quickly.

Not the answer you're looking for? Browse other questions tagged linear-programming modeling constraint-programming algorithms or ask your own question.