I do not have a background in optimization and I am trying to teach myself more about this topic. I find myself having a lot of trouble understanding the different "types" of optimization problems that exist.

However, I find myself very confused when trying to sort through the following types of optimization problems:

When I think of these problems, the first thing that comes to mind is that they are fundamentally different from optimizing continuous functions. For instance, the inputs of the above list of problems are usually "categorical" in nature. This is why I have heard that problems belong to the above list usually require "gradient free optimization methods" (e.g. evolutionary algorithms, branch and bound, etc.) , since it is impossible to take the derivatives of the objective functions corresponding to these problems.

For example, if you take problems such as the "Traveling Salesman" or "Knapsack Problem" (note: I have heard that these problems belong on the above list, but I am not sure), I would visualize the objective function as something like this:

This leads me to the following question:

----Are there any well known examples of non-convex discrete/combinatorial optimization problems?: Mixed-Integer Nonlinear Programs (MINLPs) are used to model non-convex discrete/continuous problems (they include mixed-integer linear and pure integer programs, see classification chart below). There are plenty of examples in the MINLP library: https://www.minlplib.org/applications.html.

For a real-world example, have a look at the Grid Optimization competition: https://gocompetition.energy.gov/about-competition 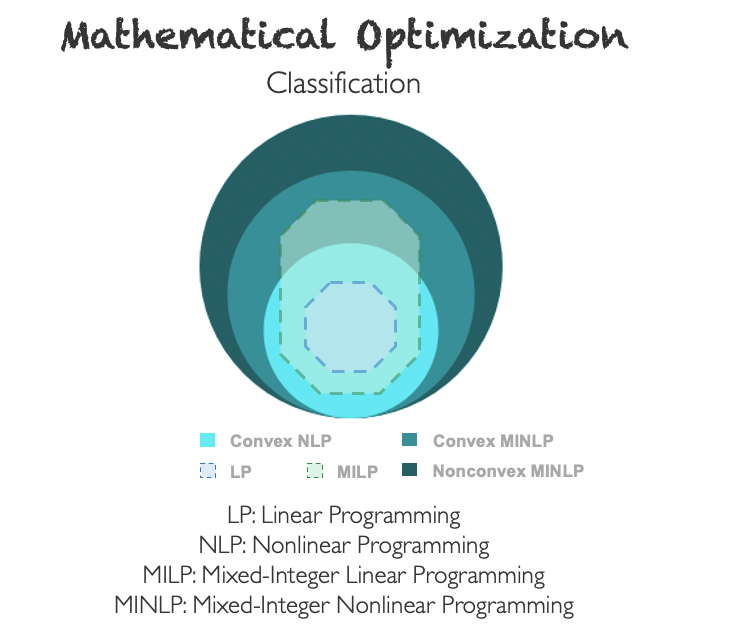 Not the answer you're looking for? Browse other questions tagged optimization integer-programming traveling-salesman knapsack or ask your own question.