How to model this multi-commodity flow problem with a twist?

The variation of the problem is twofold: 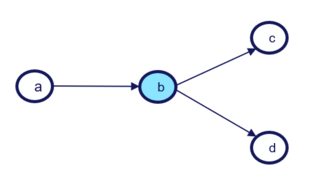 If transshipment is allowed in node $b$, then the following flow is feasible, yealding $N_{ab}=1$ ($N_{ij}$ is represented by the purple squares, flows are represents by the filled triangles): 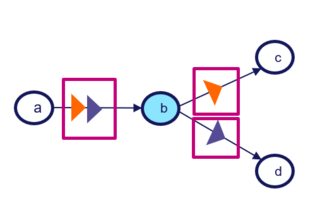 Since transshipment is allowed, all the units of flow can be packed in one vehicle on edge $(a,b)$; and then one of the two demands, $r_{ac}$ or $r_{ad}$ can be transferred to another vehicle when arriving in node $b$.

Now, if transshipment is not allowed, this is not a valid configuration, and both requests must be in individual vehicles on edge $(a,b)$, as follows: 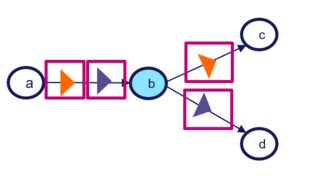 Assuming transshipment can take place at all vertices, I am currently using a columnwise formulation with a predefined set of paths $P_{uv}$ for each request $r_{uv} \in R$. So I use binary variables $y_p$ that take value $1$ if path $p \in \bigcup_{(u,v)\in R} P_{uv}$ is used, and variables $N_{ij}$ for the vehicles with capacity $Q$. As mentioned above, a weighted sum the $N_{ij}$ variables is minimized, subject to:

The first constraint enforces the selection of one path per request, while the second one handles capacity constraints. The way transshipment constraints are handled is explained hereafter.

A possible way of dealing with transshipment constraints

The way I currently cope with transshipment constraints is by duplicating vertices when I need to. For example, for the above example, I use the following graph: 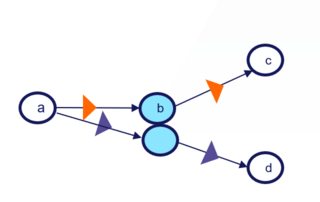 This way, it is guaranteed that both requests are not in the same vehicle on edge $(a,b)$, and so the transshipment constraint is satisfied structurally.

Is there another way to handle the transshipment constraints? I would be interested in a formulation which can handle them, so that I do not have to transform the graph. Transforming the graph does work, but sometimes it becomes very big. Also, there are many pitfalls with this approach that I can detail if necessary.

One of its weaknesses is that if there is for example a request $r_{ab}$ with path $a-b$, then this path must also be duplicated. This makes the whole process quite heavy.

I am interested in any other approach, which could simplify things.

More examples to illustrate the problem, and help validate answers

Another one: we have two requests $r_{ad}$ and $r_{ae}$. Although $a$ is a transshipment node, the requests cannot be merged on $(a,b)$, as it would imply splitting them downstream, where it is not possible.

And to make things harder, if we had a third request $r_{ab}$, it could be merged with either of the other two.

The above examples illustrate that it is not trivial to determine if requests can be merged on a given edge. In particular, this does not only depend on the nature of the endpoints of the edge. And the condition may vary from one pair of requests to another. So the formulation should probably take into account some binary parameter $\delta_{p(r_1),p(r_2)}^{i,j}$ which takes value $1$ if and only if requests $r_1,r_2$ can be merged on edge $(i,j)$ if paths $p(r_1),p(r_2)$ are used ($p(r_i)$ denotes the considered path for request $r_i$).

11
Difficulties with finding equivalent problem on literature
7
Max flow problem without splitting the flow from the supply nodes - LP formulation help
8
How to classify and model this problem?
0
How can I find the shortest path for all nodes in a graph from a source $s$?
0
How to describe the traveling salesman problem with an integer programming model?
2
Constraining flow into a node and out of a node using Min Cost Flow input
2
How to compute the minimum number of vehicles required