Gurobi and CPLEX cannot exploit more than 32 cores of machine

I have some attempts to solve a scheduling problem using the Gurobi and doCPLEX API in python and .NET on Ubuntu-server installed on a hyper-computing cluster with 64 physical cores. Unfortunately, both solvers cannot exploit more than 32 cores and it seems a bit weird to me! Even I attempted to force using 64 cores with the Threads parameter; however, it deteriorated the convergences speed. Appreciate someone has any interpretations of this case and of course a solution to this issue. 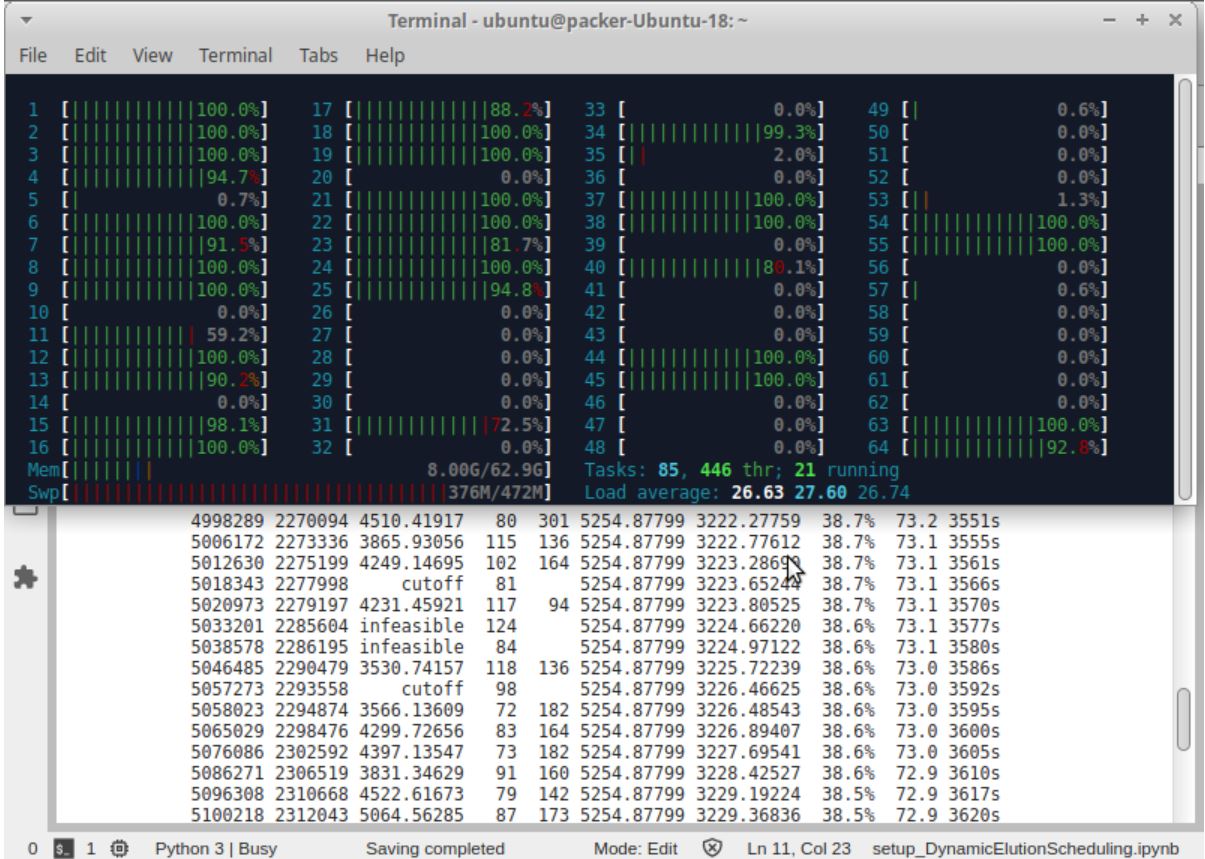 The machine is deployed with 64 physical cpus. Here is the detail of cpu #26:

The architecture of CPUs: 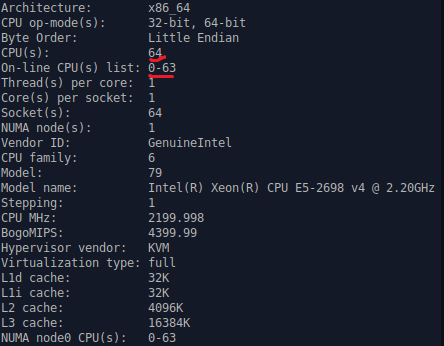 So, I tried the grbprobe and here is the result:

You need to distinguish between threads and (physical) cores. Is it possible that the cores you see in your machine are actually just hyperthreads, i.e. 2 cores resemble one physical core?

Furthermore, using many cores is not always very helpful to solve a MIP. You may want to try something like Concurrent Optimization in Gurobi to exploit performance variability and run several settings at once.

Did you already tune the solver parameters? In most cases, this is way more effective in reducing the solving time than just throwing more cores into the mix.

Modern CPUs are very complex and have at least two features that limit their scaling capability. The first one is a turbo feature that increases the clock speed when not all cores are utilized. The second one is that all cores share the same memory bus and the same L2 and L3 cache. If you solve the same problem in parallel (so start Python twice and let each solve the same problem), you will notice that it takes longer than solving just one problem, even though in both cases a single problem is solved by 32 dedicated cores.

The second issue is algorithmic. Since you mention a scheduling problem, I assume there are binary variables, so there are many continuous subproblems. Solving one subproblem can be paralellized. For the simplex method, this article by Bixby and Martin (Bixby co-founded CPLEX and Gurobi, he is the 'bi' in 'Gurobi') shows good scaling up to 4 cores. The barrier method uses a sparse Cholesky factorization, which can also be parallelized (I cannot find a reference for how CPLEX/Gurobi do this, although with certain structure you can do better than CPLEX/Gurobi). This article from 2012 (free preprint here) shows in Section 7.1 how well the barrier algorithms of CPLEX and Gurobi scale. Figure 5 shows that there is hardly any gain going from 16 to 32 cores (the efficiency drops by almost 50%), which is also commented on in the text (search for "16 threads"). In CPLEX, only the barrier method supports parallelization:

For branch&bound, the simplex method is typically preferrable because it is much better at warm starting.

So, the real question is how CPLEX and Gurobi perform branch&bound on a multicore machine. Do they solve nodes in parallel, or they solve one node at a time. For the latter, there is hardly any gain going above 16 cores, whereas for the former there is a trade-off between solving a few nodes quickly and pruning the branch&bound tree, and solving many nodes with the single threaded simplex or barrier method. Prior to CPLEX 11 you could actually control this behavior with the MipThreads and BarThreads parameters, but now there is no such option anymore. I suspect that it defaults to solving CPX_PARAM_THREADS nodes, each with a single threaded instance of dual simplex. Cplex then waits until all nodes are finished to continue. In the node log you can how much time is spent waiting. You can change this behavior by changing CPX_PARAM_PARALLELMODE to -1 (CPX_PARALLEL_OPPORTUNISTIC).

My suspicicion is that 64 instances of dual simplex do not run as fast as 32 instances, even though you have 64 cores, due to what I described in the first paragraph. You could test that experimentally. On top of that, it is possible that most of the work done by the extra cores is wasted because those nodes would be pruned otherwise. By inspecting the node log you could verify how many extra nodes were solved.

Your screenshot here indicates to me that you have 32 physical cores, 64 threads, and 64 vCPUs. You observed that Gurobi and CPLEX are not making use of more than 32 cores, but you have not shown us anything indicating that your machine has ever successfully used more than 32 cores for any calculation that doesn't use hyperthreading. If you try other software (such as MATLAB, or even just a few lines of code written by yourself only for the purpose of testing), you may find that there's nothing special here about Gurobi or CPLEX, as no other program is able to use more than 32 cores either, as long as hyperthreading is turned off.

You can also check this by checking the name of your CPU. If it says "Intel" anywhere then it does not have more than 32 physical cores unless it's a Xeon Phi in the x200 series, for which it is very well-known that the speed-up is not linear with the number of cores and does not resemble the physical cores of standard CPUs. If the name of your CPU does not contain "AMD RYZEN" or "AMD EPYC" anywhere, then your CPU is very unlikely to have more than 32 physical cores. I highly recommend you tell us the name of your CPU next time, as the highest-voted answer also suspected the same thing as me (and they turned out to be right). As the other answer says: "Modern CPUs are very complex" so when asking a question about high-performance computing, it's always very important to tell us not only the name and version of your operating system, but also the name and version of your hardware (i.e. CPU, GPU, etc.).

Not the answer you're looking for? Browse other questions tagged optimization cplex scheduling gurobi parallel-computing or ask your own question.

8
Python API and CPLEX
10
What do solvers like Gurobi and CPLEX do when they run into hard instances of MIP?
9
CPLEX, number of threads and solving time
8
Can Gurobi or CPLEX handle nonlinearly constrained problems?
2
Formulating "more complicated" objectives in Python Gurobi
3
Gurobi uses 1 core on supercomputer node with 64 cores
3
Linearizing a quadratic function with more variables or not in Gurobi?
2
Capacitated Maximum Coverage Location Problem, Python and Gurobi
1
Gurobi does not work any more in Pyomo after getting a new license