How develop a branch and bound algorithm for integer programming with black box objective function?

The problem here described was taken from a university exercitation session.

A serial production line is made of $K$ workstations: one kind product is manufactured by this line and has to be processed by each of these workstations. In each workstation are present equal machines in parallel. Stations are separated by an infinite sized buffer; products lay in buffer waiting to be processed by the machines of the downstream station (which can, for instance, be busy processing other products). The data characterizing the line are reported below:

In the image, there is a graphical representation of the line.

The line performance is the mean time products have incurred to be processed all over the line ($WT$) during a fixed time horizon. A function which simulates the line and returns $WT$ is given to the student.

The optimization problem is summarized below:

For a given $K$, $IA$, $PT$, Students are required to solve the optimization problem developing a branch and bound algorithm in Java. $WT$ must be evaluated with the given function.

What I have thought

I have searched on the internet for methodologies which can help to solve this problem. I did not find anything useful for what is reported below: 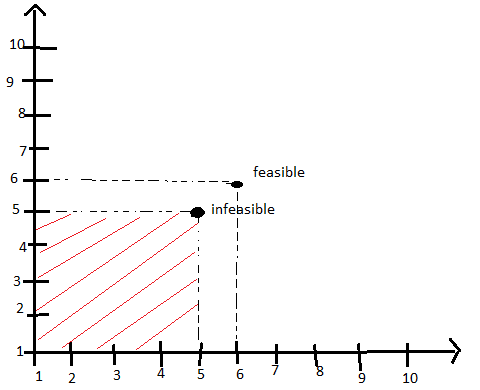 The procedure, if applied to any feasible solution, can prevent wasting time evaluating lines which are already “dominated”, reducing so computational time. Having said that, I have no idea how to develop the branches to get to a feasible solution.

I kindly ask if someone has an idea on how to proceed with my intuition; moreover, I also welcome any other kind branch and bound algorithm which can be applied to this problem.

Browse other questions tagged optimization integer-programming branch-and-bound or ask your own question.

9
What is this type of scheduling problem called?
8
Finding minimum time for vehicle to reach to its destination
12
Performance of a branch and bound algorithm VS branch-cut-heuristics
10
Approaches for choosing a “risk” factor in an Inventory Optimization problem?
4
Machine Allocation & optimal Utilization using python
16
Branch and Bound Implementation
9
How to classify and model this problem?
4
Branch and bound algorithm programming code
2
A more efficient way of solving an peculiar optimization problem