The exercise is as follows:

ACI has decided to put an order for golf shoes twice every year and expects to receive one shipment of $960$ pallets of shoes by the beginning of January and another shipment of $1250$ pallets of shoes by July. Each pallet contains $20$ cartons of shoes. Upon arrival to Canada, CBSA takes custody of the shoes. The company should decide how many cartons of shoes to release each month from Customs to supply all their demand while maintaining the lowest cost. For the amount of shoes that are released from Customs, the company needs to pay their duty cost. Because of the time value of money, it costs the company more to clear the shoes sooner than it does to release them later. So, the company might decide to delay releasing some of the shoes by a few months. All the shoes however should be released by the end of December. If we consider the value of shoes, the $19$ percent duty cost and the company’s goal to return $13$ percent on their investment, the cost of releasing one carton in each month along with the expected amount of demand for each month is listed in the table. Note that the duty cost and the return rate are already considered and you do not need to account for them.

The company can choose to delay releasing some of the shoes and keep them in the CBSA storage facilities. In this case, the company will not have to pay duty until the time the shoes are released but will have to pay $\$0.36$ per month for each carton that is being held in the storage facilities. Formulate a linear programming model for the problem that minimizes the company’s overall cost. Define the three linear programming elements of the model and write down the formulation.

(a) Write the model in Excel using color-coded and clearly-defined cells, then solve the model using Excel solver.

(b) Observe the solutions, and very briefly describe your observations. This can include a brief description of what the company should do in plain words.

(c) Now, assume that CBSA storage facilities will not store more than $4000$ cartons at a time. The company however, has an internal storage capacity that can store the rest of the shoes that are not sold and are already released from Customs. There is a $\$0.1$ cost for storing one carton of shoes for one month internally. Note that in order for the company to store the shoes in the internal storage facilities, the shoes must have been released (i.e. the duty cost must have been paid). Write a linear programming model for this problem.

(d) Write the model described in (c) in Excel and use Excel Solver to solve it.

(e) Describe your observations from the solutions.

Let $x_i = $ the number of cartons of shoes released in month $i$ (month $1$ is January, month $2$ is February, etc.). Then the constraints on my objective functions are as follows:

My objective is to minimize $Z$. I will do this using a linear program solver in Microsoft Excel. 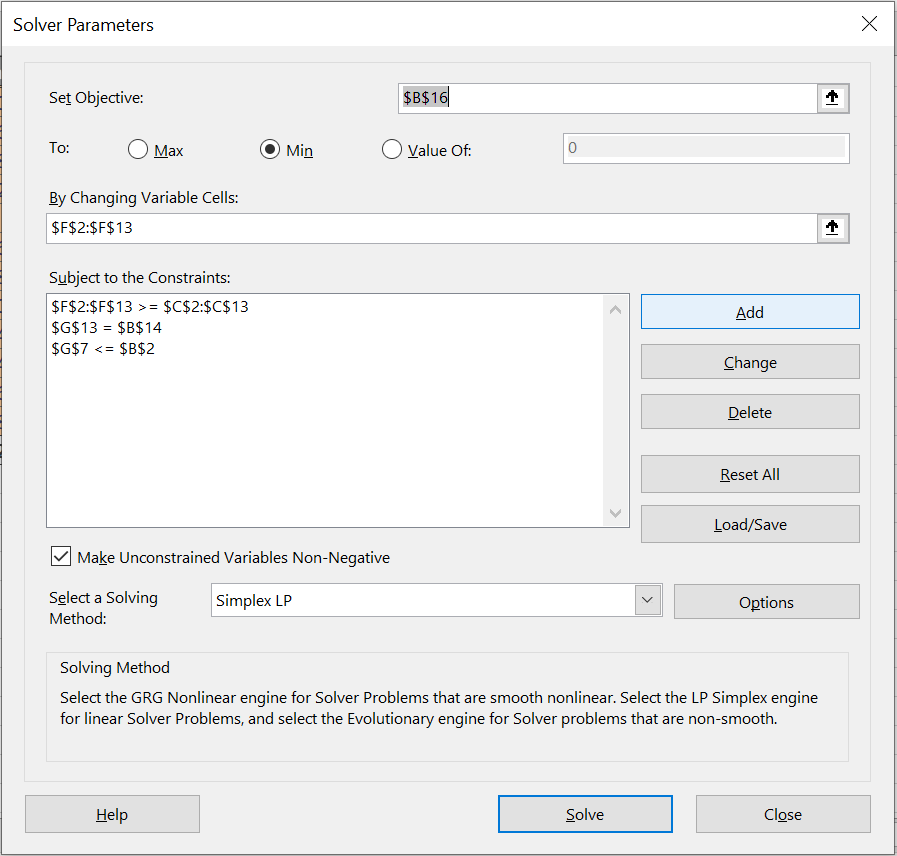 The reason I am suspicious of this solution is that it seems trivial. It's not unbelievable, but it does seem slightly odd that this would be the answer. But okay, on to part (c).

The new constraints on our model are as follows:

I believe these are sufficient to represent the new scenario, because if we don't have overflow in the CBSA storage in January and July, then we won't have overflow at any other time because those are the only times we have new supply. 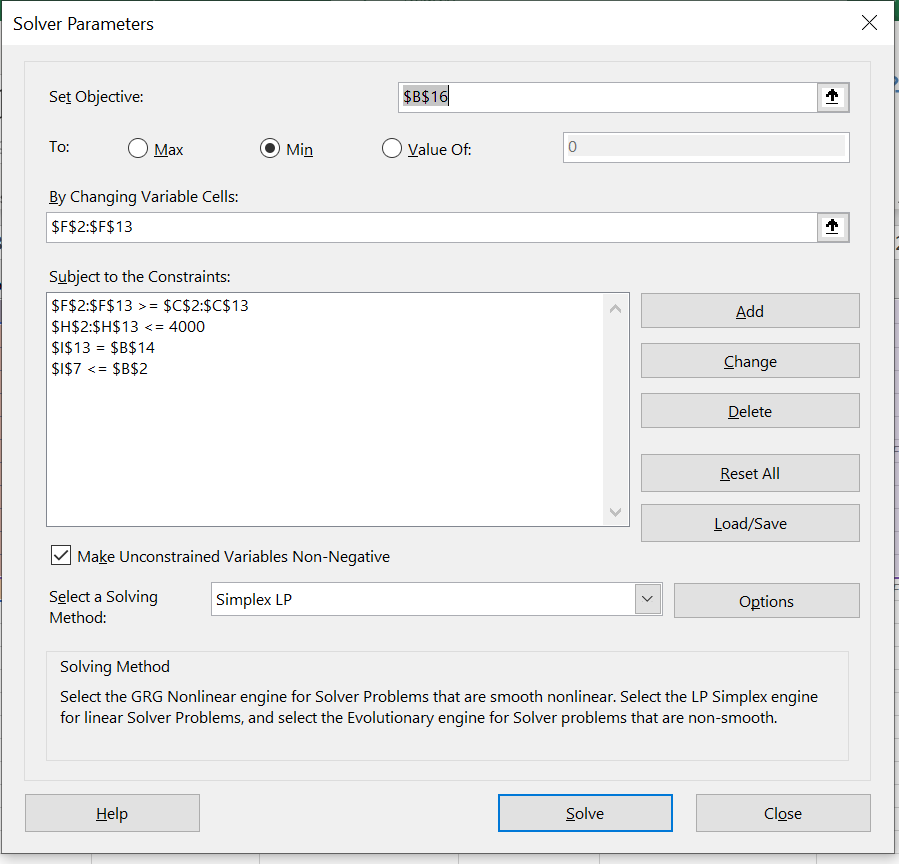 And finally, here is where I have an error: 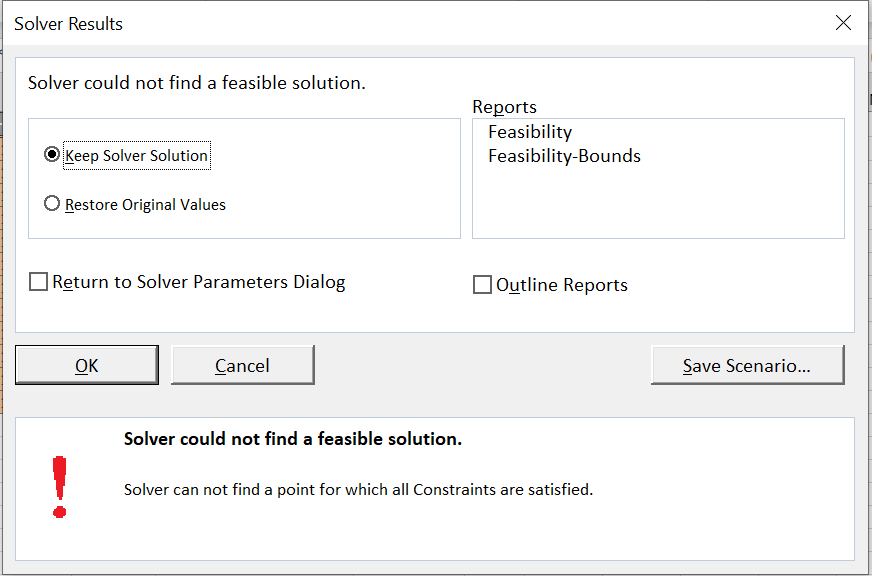 So I suppose I must have made an error somewhere. I cannot find it. I know the problem is extremely long - I guess that's the nature of these linear programming problems - so I thank you infinitely for the help.

Try to come up with a feasible (not necessarily optimal) solution, plug it into cells F2 to F13, and see if any of your constraints are violated. If so, and assuming your solution is really feasible, those are the constraints to fix. If not, meaning all constraints are satisfied, then possibly there is an issue with how the model was plugged into Solver.

Not the answer you're looking for? Browse other questions tagged linear-programming solver integer-programming excel or ask your own question.

11
Expressing a chain of boolean ORs using ILP involving different variables
6
Integer programming example clarification
11
What to do with cuts (constraints) when a fixation is contrary to a RHS in a ILP / LP relaxation?
9
Introducing a big M variable in given equations
12
Improving cuts from sub-problem with problem-specific hierarchical information
0
How to deal with the sub-problem with zero reduced cost in D-W decomposition
6
ILP Constraint to ensure exactly one constraint from a set of constraints is satisfied
2
How to linearize inequalities having max or min?
2
Tuning the coefficients of an objective function of LP