Are fuzzy sets appreciated by OR community?

I may not be correct but it seems that the leading operations research and management science journals (Informs OR and MS) do not publish any works on fuzzy logic or fuzzy sets. I could find only three papers in MS and zero papers in OR that have "fuzzy" in their title. The first of the three papers in MS is from Zadeh and Richard Bellman (who are well known for their contributions) and has been cited over nine thousand times. The last of the three papers is published in 1983 as can be seen in the picture. 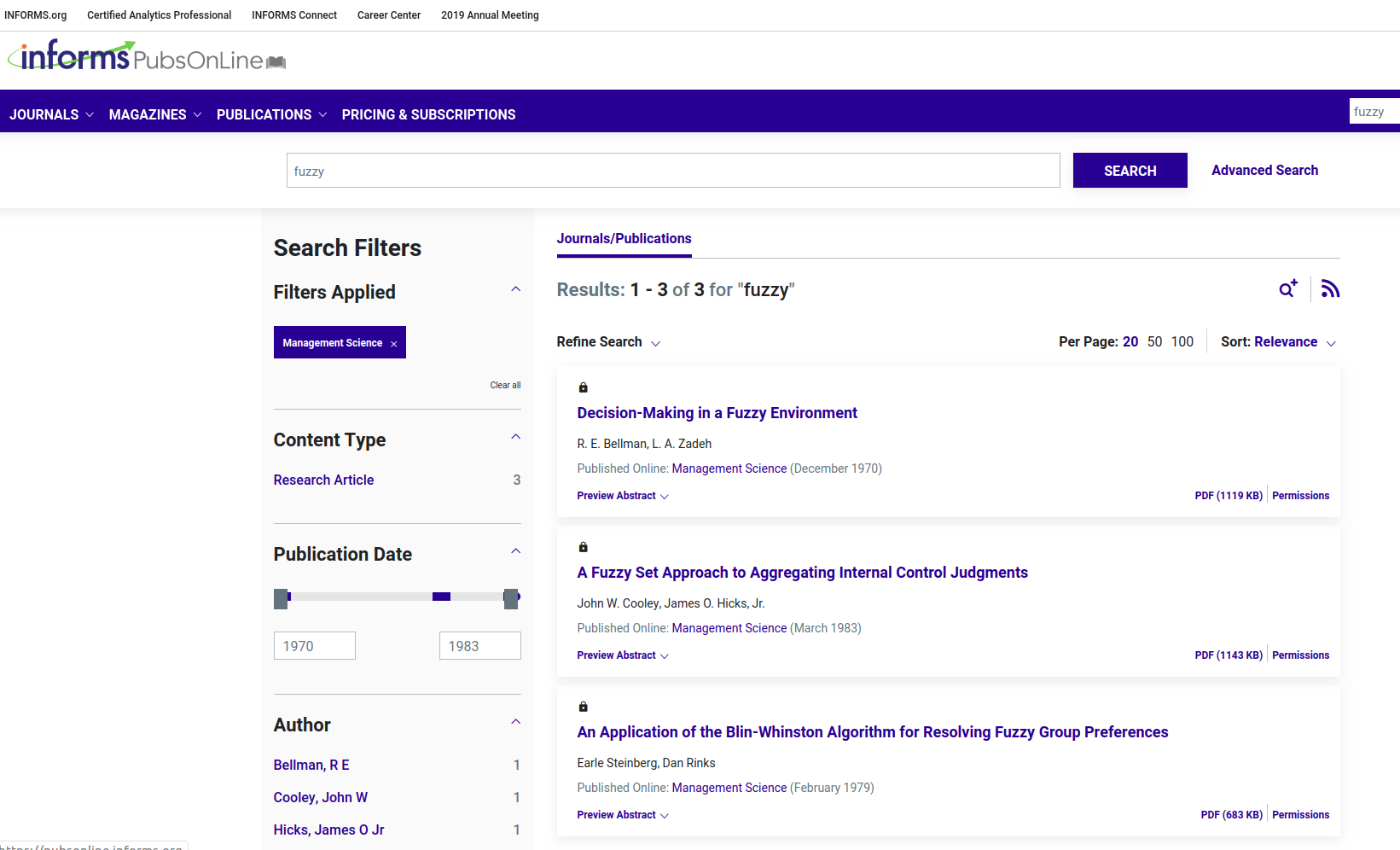 Does it mean that fuzzy sets have nothing to do with OR? I don't understand why an OR paper relevant to fuzzy sets cannot or should not be submitted to such journals.

Generally, fuzzy sets are not appreciated by the operations research community, particularly in the United States. The topic is not included in any of the standard OR textbooks (like Taha "Operations Research" or Winston "Operations Research: Applications and Algorithms") nor is it part of the curriculum of any undergraduate or graduate program I have seen.

Inclusion of "fuzzy sets" in operations research seems itself to be fuzzy.

Disclaimer: The following is based on my own thoughts and discussions with colleagues, hence not supported with hard data. Also, I'm no expert in fuzzy theory, but I've good experience with robust optimization and stochastic programming.

Regarding the possible publication venues, as @michael-trick already mentioned, journals such as EJOR, JORS, and OMEGA publish papers in this area on a regular basis. In addition, journals dedicated to artificial intelligence (e.g., Expert Systems with Application and Information Science) or OR applications (e.g., Computers & Industrial Engineering) usually publish a good number of fuzzy papers.

About why fuzzy is relatively neglected by North American researchers, here is my two cents. Fuzzy sets were originally intended for modeling ambiguity. Fuzzy sets are a better tool to be used in soft-OR models (usually advocated by European researchers), as opposed to hard-OR models (usually advocated by North American researchers). To clarify this, I've to explain the idea behind fuzzy sets. For this matter, a classical example is that different people have different perceptions of hot, warm, and cold water and those perceptions are not necessarily related to the water temperature. This idea is not very consistent with the input data used usually used in optimization models. Following the fuzzy terminology, numbers used in optimization are crisp by nature and usually have no ambiguity in them. For example, consider customer's demand in a supply chain model. Perhaps you don't know what the future demand would be, however the demand itself is crisp. In other words, the fact that you cannot measure the future demand does not make it ambiguous. It's just unknown.

In my opinion, fuzzy sets inherently suggest a notion of uncertainty, e.g. a statement may be “half-true” as it cannot be clearly determined whether it is true or not.

This type of uncertainty is very often dealt with in OR through e.g. stochastic programming. So I don’t think there is any limitation of using fuzzy sets in OR, for as long as it solves the problem. In fact, I for one would be curious to see what type of use fuzzy sets could have in our community.

Not the answer you're looking for? Browse other questions tagged journals or ask your own question.

11
How do OR researchers choose which journal to submit and what are the differences between them?