How to quantify the "griddiness" of a set of points?

We're working on a facility location problem in which it is desirable for the facilities to be laid out as close as possible to a grid. In our problem, a lattice is overlaid on the region, and the centers of the resulting cells are potential facility locations.

We want the facilities to be in a regular pattern that resembles a grid. So, it is preferable to have a layout like this: 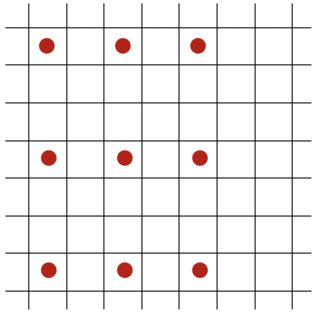 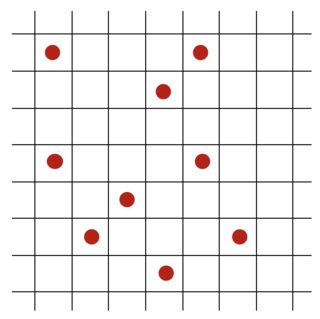 Note that the grid does not have to be the same as the lattice; that is, the following is good too: 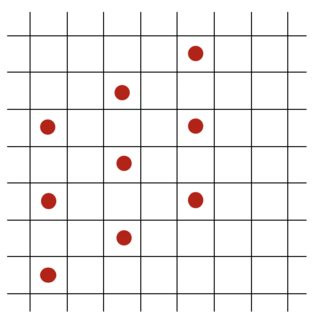 Is there a way to evaluate how close a given set of points lies to a grid? (i.e., the "griddiness" of the set of points)

In particular, I'm looking for either a simple calculation (something involving sines and cosines...?) or an efficient algorithm that will give a score indicating how "griddy" a set of points is. Most likely we'll be using this within a heuristic (greedy + swap, metaheuristic, something like that), but bonus points if there's a method that could be incorporated into a linear MIP.

Note that we don't know in advance which "grid" the solution will resemble -- the method should be capable of determining that both the first and the third layouts are good, and the second is bad.

An idea could be to evaluate what is the smallest number of straight lines required to cover your locations. You would expect that aligned points are covered with much fewer straight lines than non-aligned points. Moreover, this metric would work for any type of alignment, not just the one that follows the lattice.

This paper (Covering a set of points with a minimum number of lines, by Grantson and Levcopoulos) seems to suggest that the evaluation of such a term in the objective function should not be too expensive.

This is interesting. Perhaps you could find the linear transformation to the lattice that has the minimum deviation from integrality. This would "standardize" your grid in some sense.

The objective function (OF) of a given set of points (the $x$'s) could be compared to the OF with a different set of points ($x_{alt}$) as long as the dimensions are the same.

One downside is that this wouldn't handle "holes" in the grid well - if your data is equally spaced but in an L, this would give the same result as having them all in a square. Not sure if that matters for your application. Similarly, this wouldn't penalize locations that are increasing in distance from each other in constant increments (e.g., in one dimension a spacing of 1 2 4 8 would be the same as 1 2 3 4).

Also this is a mixed-integer LP when the points are fixed, but if they're variables as well, this becomes nonlinear.

2
What is the state of the art on the Weber problem?
3
Adding robustness to the objective function of the facility location problem
2
How to design and scale sales territory?
7
How to enforce a relation between two variables
2
Capacitated Facility Location problem with a dynamic set up cost
1
How to model this problem?