Is there a canonical name for Score Folding (multiplying a priority soft constraint by a big weight)?

I've regularly encountered that there are too many constraints to categorize into just hard and soft constraints. For example:

I've started calling this practice Score Folding in the OptaPlanner manual, but I've not seen that term used anywhere else, so I am wondering if there's a consensus for it that I should use instead.

Note that I am not a fan of Scoring Folding, to say the least. I've introduced for multi score level support a decade ago, to avoid it, as the big weight can easily cause invalid behavior with the wrong dataset, being too big, or too small, or both (even with 64 bit numbers). 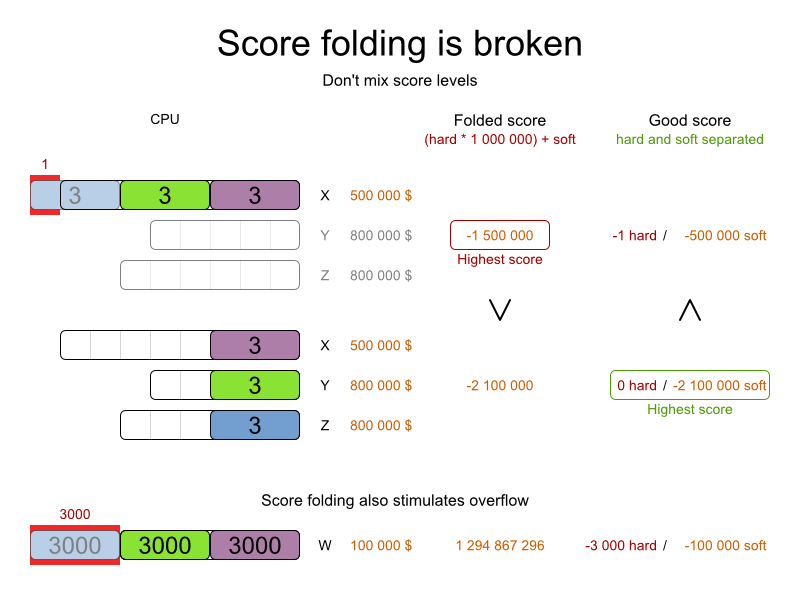 The act of moving soft constraint into the objective function using penalties is closely related to Lagrangian Relaxation and Lagrangian Multipliers.

The method penalizes violations of [...] constraints using a Lagrange multiplier, which imposes a cost on violations. These added costs are used instead of the strict [...] constraints in the optimization. In practice, this relaxed problem can often be solved more easily than the original problem.

In a comment you clarified: You are solving an optimization problem with different levels of soft constraints. You want to satisfy them lexicographically, i.e. hard(er) constraints take priority over soft(er) constraints.

I suggest you solve your model multiple times. In the first pass, include only the absolutely necessary constraints. If it turns out to be infeasible already, you've got your answer. If it is feasible, include the next level constraint and re-optimize. If you still got a feasible solution, continue.

Eventually you will have a solution that satisfies as many soft constraints as possible.

I’m not sure I’ve heard a canonical name, but that sounds like a multi-objective optimization problem where you’re minimizing the sum of weighted deviations. The weights are based on the constraint priorities. I’ve run into this a lot with nurse scheduling models - eg many types of constraints that can’t all be simultaneously satisfied (eg union rules, staff preferences, hospital requirements) and have different abilities to be violated.

As Rob and Michael mentioned there may be other ways to solve your problem. Depends on your requirements and your current method may be just fine. If you do want to mix it up, another framework you may want to consider is lexicographic goal programming.

You are likely to want greater complexity than that, see below.

Suggestion: representation of a category.

A Hasse Diagram can be used to represent functions between special types of orders.

Similarly your "very soft" constraint example (distribution of workload) could become absolute if the person quit. Even your "soft" constraint (fuel and vehicle routing problems) is subject to correct operation of the gauges and road construction.

Having a way to hold all the values and perform calculations to shift the values and weighs dynamically is important. You might chose to derive a Skew Tableaux from the matrices and traverse it in order, based on the re-ordering of your constraints after correctly calculating the weights dynamically and determining the overlap of the partially ordered sets.

A representation, such as Birkhoff's Representation Theorem, is the formal word used to describe sets that have been redefined (reordered) by their weight and interaction.

"In mathematics, representation is a very general relationship that expresses similarities between objects. Roughly speaking, a collection $Y$ of mathematical objects may be said to represent another collection $X$ of objects, provided that the properties and relationships existing among the representing objects $y_i$ conform in some consistent way to those existing among the corresponding represented objects $x_i$. Somewhat more formally, for a set $\Pi$ of properties and relations, a $\Pi$-representation of some structure $X$ is a structure $Y$ that is the image of $X$ under a homomorphism that preserves $\Pi$. The label representation is sometimes also applied to the homomorphism itself.".

"Homomorphisms of vector spaces are also called linear maps, and their study is the object of linear algebra. The concept of homomorphism has been generalized, under the name of morphism, to many other structures that either do not have an underlying set, or are not algebraic. This generalization is the starting point of category theory".

Perhaps, in your case, you would use "Representative Score" instead of "Score Folding".

Not the answer you're looking for? Browse other questions tagged constraint reference-request penalty-based-optimization or ask your own question.