To which area does constraint programming belong?

The problem I solved is a flow-shop scheduling problem with parallel machines.

I solved it with the IBM ILOG CPLEX Optimization framework. There I used the constraint programming (CP).

The question is now to what kind of field of operations research CP belongs, in particular the described flow-shop problem.

But I'm not sure because I don't know if my problem can be formulated in a mathematical way, needed for linear optimization.

So can someone help me classify this?

In general, I think Constraint Programming or Constraint Satisfaction Problems have their roots in Computer Science/Artificial Intelligence communities that may or may not overlap to some extent with the Operations Research communities. According to "Artificial Intelligence, A Modern Approach" by Stuart Russel and Peter Norvig, an early example within computer of a specific constraint satisfaction problem was Sketchpad. That book furthermore notes that the idea that CSP's can be generalized came from a 1974 paper by Ugo Montanari in the journal Information Sciences.

Linear programming was developed earlier, mostly by mathematicians, as pure Computer Scientists did not even exist back then. Wikipedia mentions contributions from Kantovorich in 1939, and from Dantzig and Von Neumann in 1947.

In Constraint Programming, you can imagine your variables to be nodes in a network with a discrete set of possible values, and the constraints as links between two or more variables/nodes. It performs a "clever" brute force technique: you can pick a constraint, and see if the sets of possible values in the variables affected by the constraint are compatible. For example, if for a variable $x$ we have $\{1,2,3\}$ as possible options, and for variable $y$ we have $\{2,3,4\}$ as possible options, the constraint $x+y\leq 4$ can be used to determine that $y$ can never become $4$, so it can be safely removed from $y$'s set of possible values. It performs guessing (what happens if I assume $x$ should be $2$?), backtracking and repeatedly using constraints to update the possible values of each variable (this is called constraint propagation). It aims to search for a feasible solution that satisfies all constraints, not necessarily an optimal one. If it turns out one of the sets of potential values for a variable becomes empty, it is clear you need to backtrack. The advantage of this approach is that you do not need all your constraints to be linear. In fact, as long as a constraint can be efficiently used to prune possible values from the variables it affects, it can get as crazy as you want, and this is why Constraint Programming typically offers greater modeling flexibility compared to linear programming. The downside is, however, that it is very hard to deal with continuous variables in a basic setup.

Note that the IBM ILOG CP Solver has many advanced features that seem to combine ideas from Constraint Programming and Linear Optimization, as it does allow optimization and, I believe, continuous variables.

If you really like to understand the fundamental of Constraint (Logic) Programming, you should read the paper In Pursuit of the Holy Grail by Eugene C. Freuder, where in the abstract he writes:

Constraint programming represents one of the closest approaches computer science has yet made to the Holy Grail of programming: the user states the problem, the computer solves it.

The main focus of CP is not on a specific single problem or a single class of problems, but it is the design of a very general declarative computer language that would permit to solve any problem that can be stated using that computer language, regardless of the techniques used inside the solver. For instances, the plot reported by @Rob presents several different computer languages for different CP solvers.

Once say that, indeed, if you look at the programming techniques used internally by CP and/or MP solvers, there is a growing intersection of methods, and several researchers are trying to unify the two worlds. Just to mention two seminal references, you can look at:

Finally, for looking deeper at the interplay between CP and OR, I would suggest to explore the proceeding of the CPAIOR Conference Series, where you can find several papers related to scheduling problems close to yours.

... the main question is "how to classify CP within the hierarchy of OR and optimization".

Paul Shaw and I were invited by John Poppelaars to give talks at the Back to School seminar of Dutch ORMS society. Part of our presentation was a brief history of constraint programming. We drafted this slide to summarize it: 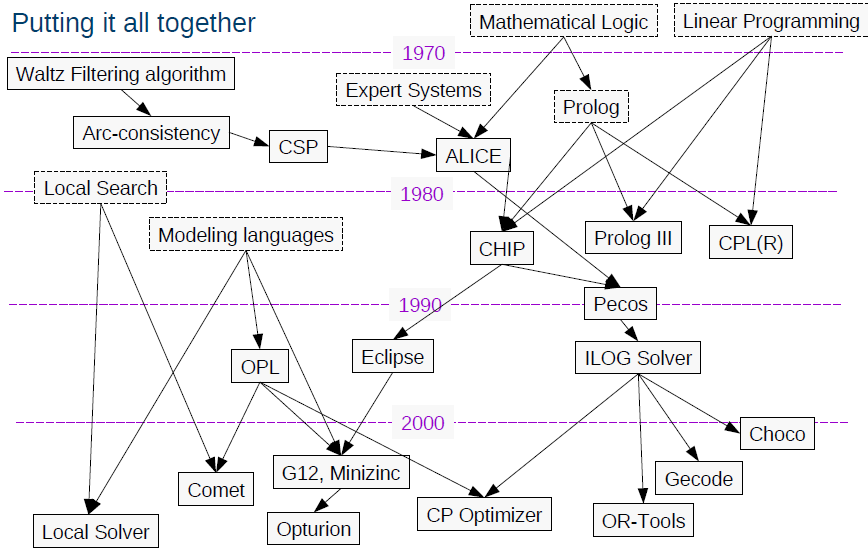 ... Its abstract is reproduced below, and the slides are available here (requires IBMid) [alternative source "Constraint Programming Background and History - LNMB" (.PDF) 35 pages].

This talk will review the principles and the historical roots of constraint programming (CP). Indeed, understanding the history behind this field helps understand the basic principles it is built on. CP can be traced back to a combination of Artificial Intelligence, Combinatorics (graph algorithms), and programming language design. It took two decades to unify these in a comprehensive and versatile framework shared by all modern CP tools and solvers. We'll review this framework and how it is implemented in recent tools. Last we will relate it and contrast it with mathematical programming.

The webpage link contains some additional unrelated (to the question) but interesting information. The blog: "Optimization Engines Make The Industry Efficient" (Aug 28 2018), by Diego explains the earliest history of CP:

In 1997 the Parrot project started with ILOG, Carmen Systems, Lufthansa and Olympic Airways.

The objective of the PARROT project is to provide efficient means to address the highly complex and costly problem of airline crew scheduling […] developing on promising results in the combination of Operations Research (OR) techniques and Constraint Programming (CP).

"We developed two different algorithms to tackle the large scale optimization problem;of Airline Crew Assignment. The ﬁrst is an application of the Constraint Programming (CP) based Column Generation Framework. The second approach performs a CP based heuristic tree search. We present how both algorithms can be coupled to overcome their inherent weaknesses by integrating methods from Constraint Programming and Operations Research.".

Not the answer you're looking for? Browse other questions tagged optimization constraint-programming or ask your own question.

12
Convex Maximization with Linear Constraints
7
CP Framework/Solver for .Net Core
8
How to classify and model this problem?
2
How to model two variables to NOT to belong to the same set partition using Constraint Programming
0
What kind of job shop scheduling problem is this and how do I solve it?
3
How to learn Optimization?
3
Scheduling minimization Integer Programming problem formulation
5
Optimization When True Costs Are Unknown
4
Maximizing sum of step functions under single linear constraint